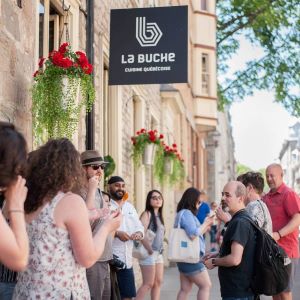 Old Quebec is the only walled city north of Mexico and has been designated a World Heritage treasure by UNESCO. As the cradle of French civilization in North America, Quebec is a living history lesson with a remarkable mix of architecture, heritage, art, and culture. Perched atop the headland, Chateau Frontenac has stood overlooking the St. Lawrence River and Dufferin Terrace for over 100 years. Get a unique glimpse into modern Quebecois culture on a beer tour of Quebec City. Located in the burgeoning St. Roch neighborhood, the three breweries visited will provide a fun chance to explore Quebec's growing beer industry. No beer tour is complete without tasting of course, and this tour offers the opportunity to sample nine different beers along with snacks to keep you going. Then eat like a local during a 2.5-hour small-group food tour in Quebec City offering 15 tastings. Indulge your tastebuds as you sample a range of French-Canadian specialties including wine, beer, crepes, chocolates, syrup and more. You'll stop to snack at a range of purveyors located in the city's top eating neighborhoods such as hip St-Jean-Baptiste and the charming Old Quebec.