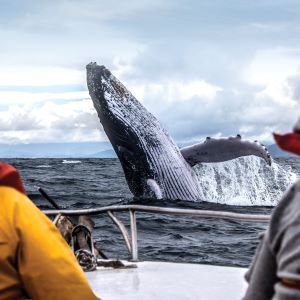 Fairmont Hotel Vancouver, known as the 'Castle in the City', is located minutes away from Vancouver's biggest attractions including Granville Island, Robson Street shopping, Stanley Park Seawall, Vancouver Aquarium, Gastown, Canada Place and Science World. Where else can you enjoy a 360º aerial view of Vancouver, “the most beautiful city in the world”? Start your Vancouver adventure here, with a forty-second glass elevator ride, whisking you 553.16 ft (168.60 m) skyward to the panoramic observation deck. The Vancouver Lookout is part of the fabric of the city and a staple of Vancouver's skyline since 1977. The whale watching tour focuses on Southern Resident Killer Whales, Transient Killer Whales, majestic Humpback whales, and other marine wildlife such as porpoises, sea lions, seals and bald eagles. The Killer Whales come to this region to feed on the salmon that are returning to the Fraser River to spawn.